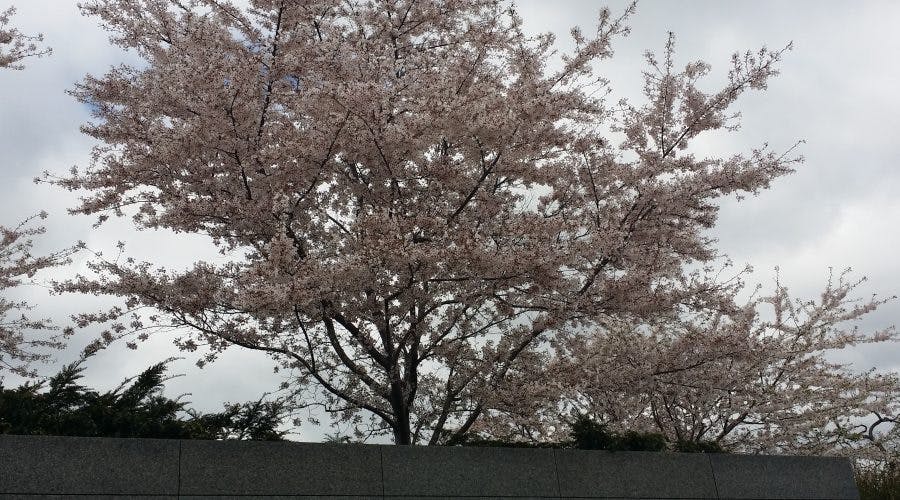 This year I arranged for our club to have a Cherry Blossom Tour at the Tidal Basin during the Cherry Blossom Festival.   Usually, by this time of the year frost has nipped the cherry blossoms off the trees, and the wind is unbearable.  But this year the wind wasn’t freezing, and there were plenty of beautiful cherry blossoms to see.  The day that I picked for our group was during the day of the Kite Festival.

Our group has a picnic

I met my group at Noon, and we first sat down on benches near the Martin Luther King, Jr. memorial gift shop.  A few of us went shopping, while the rest of us ate our lunch. It was quite fun sitting around eating the food that we brought from home.

The Franklin Roosevelt Memorial is designed to give a feel that you are outdoors in the natural surroundings.  Of course, one of our members had to stand in line for a photo.   Roosevelt was the first to use the radio for a weekly address to the nation.  He also supported America’s with disabilities.  He helped establish the American’s with Disabilities Act.  Hence you will see a sculpture showing different sign language.

We stopped by George Mason Memorial  that I always forget is along the tidal basin.  George Mason wrote the Virginia Declaration of Rights, which inspired Thomas Jefferson’s Declaration of Independence.  The fountain is off so there is just a big large dry pit.  No one has planted anything around the memorial in a very long time.  The ground has grey patches.  The lettering on the benches have been either chiseled off or faded off.  I personally like this memorial, but I hate how the National Park Foundation neglects it.

This memorial allows for grand vistas of the Cherry Blossoms, and the Washington Monument.  You can just sit on the steps, and see everything.  We just got to the steps just in time to have our Blossom Tour of the Cherry Blossoms on the Tidal Basin.  Our Park Ranger told us that there are two types of Cherry Trees that bloom at different times, their flower bloom season overlaps each other.  This year the trees that bloom later hadn’t come out yet so there were green patches.  We began our tour with a history of the Tidal Basin.  Originally, the area was swamp, mosquito filled, and a sewer dump.  It wasn’t until the 1900’s McMillan Plan that the swamp was dredged and a Tidal Basin was constructed.  If you are sitting on the steps of the Thomas Jefferson Memorial, the doors on your left open in the morning to bring in new water.  In the evening, the doors on the right open to let out water.

Next, we talked about how the Cherry Trees were planted.  First Lady Helen Taft fell in love with the Cherry Trees, and became friends with the Japanese Emperor.  The Japanese Emperor gift the American Government with 3,000 Cherry trees.  When they opened the boxes of Cherry Trees the trees were decayed, molded, and beetle infested.  They decided to burn the majority of the decayed Cherry Trees on the mall in a bonfire.  Of course, this was very exciting for everyone, and they sold tickets to the event.  Hotel room pricing went up.  Because of this horticulture error, the Japanese felt very badly that the trees were in such poor shape.  They eventually sent another 3,000 trees to America.  This time the trees were good, and planted throughout the tidal basin and mall.

After our Blossom Tour, we were all well rested.  And, we ended our day at the Cherry Blossom Kite Festival.  Even though the sun was behind the clouds, the wind was perfect for kites.  We enjoyed watching the different kite sizes fly in the sky.