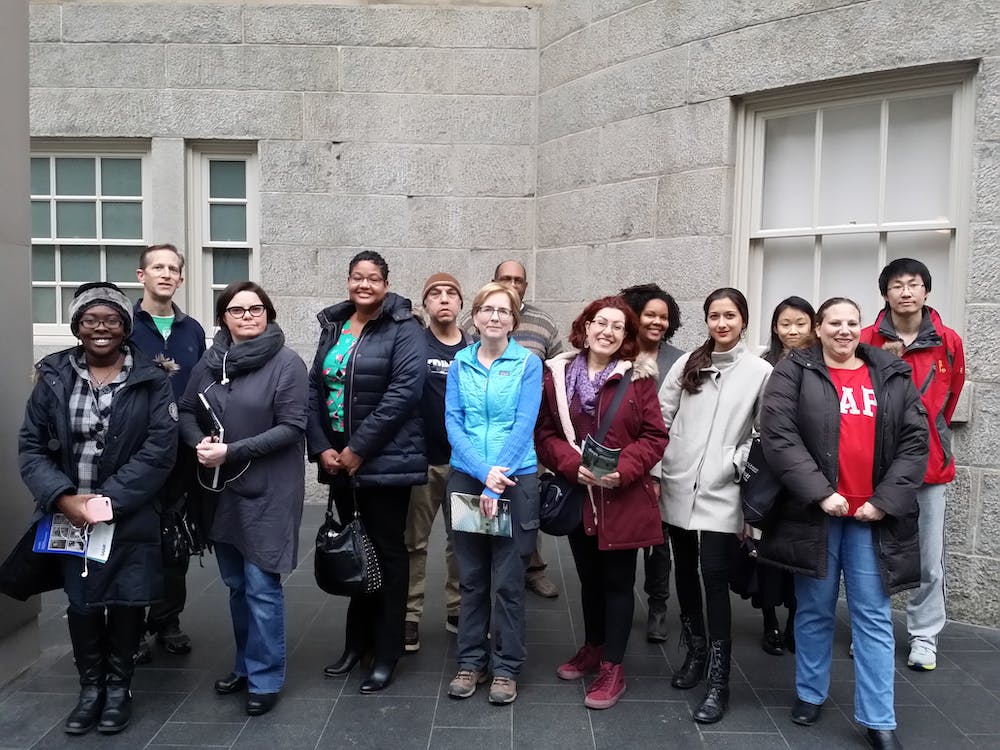 We began by viewing these rare portraits painted by Joshua Johnson, Portrait of a Sea Captain, 1810. I hadn’t known about this artist prior to our tour. Unfortunately, the museum only knows that he worked in Baltimore. I hadn’t realized that African American’s were considered among Early American Artists, and were more than capable of producing fine art, and a living.

The next artists that we saw were involved in the Hudson River Landscape movement. Here is Robert Duncanson. This one is called Landscape with Rainbow 1859. Our guide says for the most part he was self-taught.

We next saw Henry Ossawa Tanner’s Abraham’s Oak 1905. He was internationally known, and accepted in French circles. He most likely was influenced by Monet and his friends.

We then went to the Harlem Renaissance era artists. We looked at William H. Johnson, Café, 1939. Our guide told us that this artist was influenced by Japanese Woodblock Print style. She mentioned that the lady who is dressed to perfection is wearing stockings that are white because she couldn’t find stockings that matched her complexion at the department store. A very nice way of making a political statement through your art.

This is one of the few sculptures by an African American female artist. It is Elizabeth Catlett, Singing Head 1980.

This photo is showing an artist who decided to go against the grain her current norms of her time. This is Les Fetiches, 1938, by Louis Mailou Jones.  Her objective was to show African Masks as being a valid point of reference in art.

Then our tour guide showed us Horace Pippen Old Black Joe 1943. He was a self-taught artist that had reached an elevated style. If you look at the clouds with the details of shading they create movement in the sky. I really appreciate the detail in the background. And, I am sure this is one of the reasons why this painting caught the Museum’s curator’s eye.

This is Alma Thomas, Gray Night, 1972. She is apart of the Colorist Movement that originated in Washington, DC. She is unique by using blotches to create scenic paintings. And,  if you stare at the painting long enough you can see objects.

Join us via zoom for one of our virtual tours!