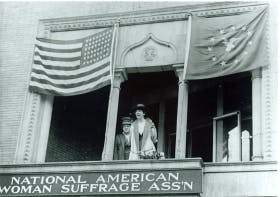 A wonderful thing about taking a group into the US Capitol is that I get to hear nuggets of information that are  amazing.  This time around the US Capitol happened to be celebrating the First Woman in Congress.  Her name is Jeannette Rankin and she was voted in by the state of Montana.  She was a Republican and had two terms in Congress in the US House of Representative 65th (1917–1919), 77th (1941–1943).    April 2, 1917 was her very first day of work at Congress.   The photo here is her Statue that is proudly displayed in Emancipation Hall.

She was born near Missoula, Montana on June 11, 1880.  Her father was a rancher, and her mother was a schoolteacher.  Her undergraduate degree was obtained from the Montana State University (University of Montana) in 1902, and she achieved a degree in social work from the New York School of Philanthropy (Columbia University School of Social Work).  After briefly working as a social worker in Spokane, Washington, she entered the University of Washington in Seattle.  At the university, she joined the suffrage movement.  She was so successful working for the suffrage movement that she became a professional lobbyist for the National American Woman Suffrage Association (NAWSA).  She helped Montana women gain the vote in 1914.  This is way before the rest of the country.

Mrs. Rankin began her campaign for the House seat for Montana in 1916.  She had two advantages: her great reputation as a suffragist, and her brother Wellington, who financed her campaign.  She ran as a progressive, focused on working for a constitutional woman suffrage amendment and social welfare issues.  She was also a pacifists which led her to vote No for all wars, and military conflicts throughout her political carrier.

A Vote for Women

As the very first woman in the U.S. House of Representatives, she was viewed as being on the front lines of the national suffrage fight.  She created a Committee on Woman Suffrage, which ultimately opened the very first House Floor debate on the subject in 1918.  She asked the House, “How shall we explain to them the meaning of democracy if the same Congress that voted for war to make the world safe for democracy refuses to give this small measure of democracy to the women of our country?”14   Unfortunately, those old Senators didn’t agree, and women had to wait until 1920 to vote.

At the close of her first term, Mrs. Rankin was busy with pacifism and social welfare issues.  She traveled to Switzerland in 1919 for the Women’s International Conference for Permanent Peace.  She also joined the Women’s International League for Peace and Freedom.  She founded the Georgia Peace Society in 1928 after she purchased a farm in the state of Georgia.  The next year, she became the leading lobbyist and speaker for the National Council for the Prevention of War from 1929 to 1939.  She was instrumental as a lobbyist for Congress to pass the Sheppard-Towner bill and the constitutional amendment banning child labor.

Jeannette Rankin from collection of US House of Representatives

Getting Back Into Congress

The second war crisis really brought Mrs. Rankin back into politics.  She moved back to Montana to a district held by Republican Jacob Thorkelson, an outspoken anti-Semite.  She campaigned in her district at high schools about the issues of war and peace.  In the end, she won her re-election bid with 54% of the votes in her district.  She was quoted as saying, “No one will pay any attention to me this time.” And,  “There is nothing unusual about a woman being elected.”

Are We Going To War?

By this time, Mrs. Rankin moved to Washington, DC to take her Congressional seat, war in Europe was in full force and the debate of U.S. involvement was going strong.  Mrs. Rankin was at an arm’s-length attitude towards the leading isolationist group, the America First Committee.   She continued her pacifist platform by trying to add checks and balances to how we use our military resources outside the Western Hemisphere.

Pearl Harbor: One Against the All

After Pearl Harbor was bombed by the Japanese, there was a brief debate on the resolution to go to war with Japan, and naturally, Mrs. Rankin was against the resolution.  The men of Congress were in such an out-of-sort state that they tried to shut her down by various means.  First, Speaker Sam Rayburn of Texas refused to recognize her and declared her out of order.  Some Members called for her to sit down; whereas, other Members tried to convince her to vote for the war or abstain.  But, Mrs. Rankin held her ground and voted no. Rankin went on to announce, “As a woman I can’t go to war, and I refuse to send anyone else.” The war resolution passed the House 388 to 1.  People were so angry with her no vote that they chased her outside.  She had to hide in a phone booth, and wait for the police to escort her to her office.

The End of Politics

Unfortunately, because she voted by her own convictions, and not by her constituents, she became isolated by her colleagues and the press ignored her.  She decided to retire from politics in 1942, and became a gentle woman farmer in both states of Montana and Georgia.  She traveled to India where the nonviolent protest tactics of Mohandas K. Gandhi inspired her to continue her work for Peace.  She gained the lime light once more during the Vietnam War.  She led the Jeannette Rankin Brigade, numbering 5,000 in a protest march on Washington in January 1968.  And, she had made a good point.  Perhaps the idea of Peace, and diverse ways to obtain equality and peace are important methods to consider when trying to end madness in the world.

And, thankfully because of her efforts for equality and peace, now more than ever women are giving their voice to our national political forum.