Peacock Room Remix: How Does Your Patron Value Your Art?

Around 1876 Mr. Leyland bought a home at 49 Prince’s Gate in the neighborhood of Kensington in London.  Mr. Leyland remodeled and upgraded his home with the help of architectures Richard Norman Shaw and Thomas Jeckyll.  Jeckyll was responsible for creating a new dining room, which he envisioned as a porcelain room. Thomas Jeckyll covered the walls with 6th-century wall hangings of Cuir de Cordoue originally owned by Catherine of Aragon.  He also placed an intricate lattice framework of engraved spindled walnut shelves to hold Leyland’s collection of Chinese blue and white porcelain.   A painting was used in the room as both a focal point and tie all the other elements together.  The painting that was used is called The Princess from the Land of Porcelain, featuring the top beauty of the time Christina Spartali, painted by James Whistler.  This painting had been bought by Frederick R. Leland years before he bought his current Kensington home.  The room was almost finished when Jeckyll became too ill to finish the project.  James Whistler, who was then working on decorations for the entrance hall of Leyland’s house, volunteered to finish Jeckyll’s work in the dining room.

The Reason Behind James Whistler’s Creating the Peacock Room 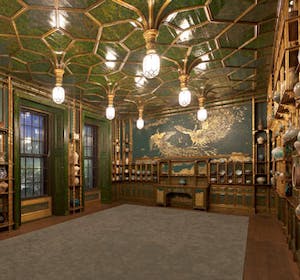 This photo to the side is the original Cuir de Cordoue originally owned by Catherine of Aragon.  James Whistler was very concerned that the choice in wall treatment with red roses adorning the leather wall hangings would clash with the colors in The Princess of Porcelain.   Whistler suggested retouching the leather with yellow paint, and Leyland agreed to the alteration. Mr. Leyland also authorized Whistler to embellish the cornice and wainscoting with a “wave pattern” derived from the design in Jeckyll’s leaded-glass door.

As you know James Whistler went a few steps beyond Mr. Leyland’s suggestions.  When Leyland first saw the Peacock Room he argued with James Whistler, and fired him on the spot.  Whistler lost his own friend and patron.  However, Leland did ask Whistler to come back to finish the room.  The last touches are the two fighting peacocks entitled “Art and Money; or, The Story of the Room.”

This dispute continued for years until 1879 when the case was settled with Whistler having to accept payment for less than half of the cost of the room and his filing for bankruptcy.  The room we now deem as fine art was treated as a manual labor craftsmanship by the courts.  And, this is where the question comes into play.  What is the true value of art when it adorns our homes?

The Princess is also featured on the Google Art Project (googleartproject.com), a site that employs Google’s street-view and giga­pixel technologies to create an ever-expanding digital survey of the world’s masterpieces. The average resolution for displayed works is seven billion pixels—1,000 times that of the average digital camera. This allows Internet users to inspect works up close, as if with a magnifying glass held just inches from a priceless painting.“Gigapixel reproduction is a real game changer,” says Julian Raby, director of the Freer and Sackler Galleries, making a Web view of a painting “an emotional experience.”

Peacock Room Remix: How Does Your Patron Value Your Art?

Darren Waterston heard of the tale of the construction of the Peacock Room, and the falling out between Frederick R. Leyland and James Whistler.  Since the Peacock Room is an icon of American Art and has a permanent home at the Freer and Sackler Gallery  it is hard to imagine that at one time this room was treated as silly woodwork tinkering.  The artist created Filthy Lucre, an immersive installation.  His reimagining of the Peacock Room —as a decadent ruin collapsing under the weight of its own creative excess.

Artists have complications in their lives between art and money, ego and patronage, and acts of creative expression in our modern times.  Artists are ideally supposed to only be concerned about creating art, but they need to deal with business patrons, and foster and support egos that need undivided attention.  If Whistler reined in his talent and expression just to appease his patron’s ego, then the Peacock Room would never have been born.  We would have a very ugly porcelain room that clashed with the only painting in the room.  It would have been a footnote in an Art History book.  But Whistler understood the important of color, and detail, and connecting the painting to the room and porcelain.  And, he unleashed his own energy without checking against anyone’s else’s opinion.

Unfortunately, when the courts were brought into the fight to resolve the conflict the judges did not have the understood what the room really was, fine art.  They only saw one person that was given instructions to decorate, who didn’t  follow orders, and went overboard with the budget.  They did not see that James Whistler created art in a room.  The courts felt that since the room wasn’t fine art they choose to devalue and categorize the room as construction and decorative features.  Hence, Whistler was not paid for the full amount in Guineas, which at that time was used as payment for art, but in pounds at less than half the price.

And, this argument continues today.  Women Artists’ art is valued at half or less than half in comparison to men’s art.  Emerging artists can’t ask for the same price that famous artists can charge because they do not have the history or press behind their own art.   It doesn’t matter what the cost of the materials are nor how long it took for the artist to complete the piece.  It doesn’t even matter how brilliant the art is that the emerging artist has created.  Price is based on factors of ego, talent, money, and press.