Who is Vincent van Gogh

Vincent van Gogh made a profound mark on the art world. His work lives far beyond his lifetime and sits in museums and galleries around the globe. When his art is auctioned off it continues to go for the highest dollar amount.  And even today artists look at his work they are still influenced.  He was extremely close to his brother Theo. Theo supported Vincent throughout his life time because his art was not appreciated, and he did not make a living from his art.

The artist was a loner and spent vast amounts of time outdoors by himself. He was also profoundly opinionated and struggled with an incurable mental illness that kept him in and out of asylums for his entire life and led to his depression and suicide in 1890. 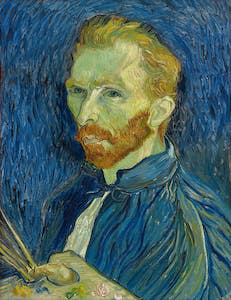 Though Vincent Van Gogh worked briefly at his uncle’s art dealership in Paris at the age of 16 he detested art dealers for his entire life. He worked in several careers before becoming an artist. He first worked as a bookseller in Dordrecht, Netherlands. Then, Van Gogh pivoted towards the world of religion. He briefly studied theology in school before training as an evangelist. Though Van Gogh was told that he would be assigned a religious congregation after graduation, he was never assigned anywhere. He waited for three months and decided to go into missionary work. During his time as a missionary, he worked amongst the impoverished population of the Borinage, which was a coal-mining region in southwestern Belgium. 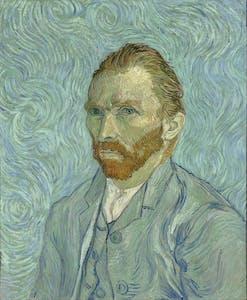 While working as a missionary, Van Gogh decided to give away all of his worldly belongings, which caused a significant scandal within his religious community. He was kicked out of the church because his cardinals felt Van Gogh was taking biblical writings too literally. They felt his choice bordered on martyrdom, which was frowned upon. 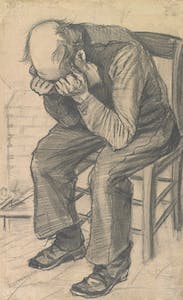 Vincent Van Gogh was only 37 years old when he died, which limited the scope of his career. At the time of his death, he had produced over 2100 works of art – about 1300 drawings and over 850 paintings. While in school, Van Gogh learned many artistic techniques from both artists and his teachers.  He experimented with different techniques and evolved his style and color palettes. Van Gogh’s rapid achievements were rooted in his frantic and constant production of work. He sketched, drew, painted, and studied nonstop as he believed he must paint within the emotional moment. All this feverish artistic production was interrupted by his frequent battles with mental illness, loneliness, and poverty. Van Gogh’s legacy stands in stark contrast to hundreds of other artists who spend decades perfecting their craft producing half of the amount of work he did. 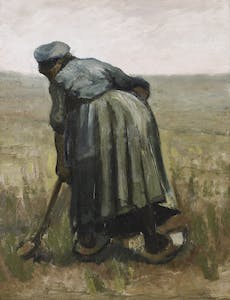 4. First Four Years He Was a Student and Only Did Watercolors and Drawings

The first four years of his artistic career Vincent Van Gogh was an art student. He was able to master artistic techniques rapidly.  While Van Gogh is most famous for his oil paintings, as a student he primarily produced drawings and watercolor paintings. He enjoyed working from directly in the moment and outside, and not from his own memory inside a studio. By the second year’s study of art in the summer of 1882, Van Gogh began experimenting with oil paints.

Van Gogh’s early works were created, in part, while he lived with his parents in Nuenen, Netherlands. It was here that Van Gogh began to sketched and painted farmers, peasants, and agricultural life. 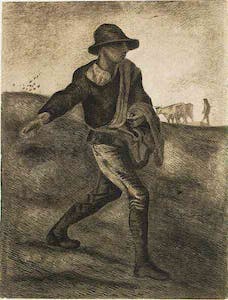 Vincent van Gogh played with color, paint application, and brush strokes throughout his career. These were the areas in which he was experimental — perhaps even radical. Yet, in terms of composition, van Gogh rarely strayed from tradition. He was keen on still life work, landscapes (which are generally his most well-known works), and figurative studies and paintings. 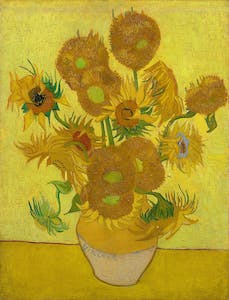 In particular, van Gogh painted many flower arrangements as still life subjects. Using the flower arrangements, he experimented with color, light, and new techniques that he learned from several different artists, and teachers. Vincent Van Gogh’s floral paintings marked a distinct shift from the darker, muted paintings created and influenced by the Classical Art of the Netherlands to the brighter, more colorful works of the Impressionisms in Paris. Flowers were a cost-effective subject and allowed him to play with color theory. Some works, like Sunflowers, were exercises in color blocking and subtle tonal variations while others capitalized on complementary colors. 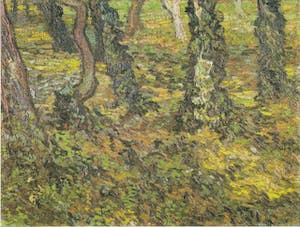 Vincent van Gogh also experimented with creating Sous-Bois paintings, a popular genre by the Impressionists and Barbizon School. It entailed trekking into forested areas to paint scenes of the woods up close, rather than perching outside of them in surrounding fields. Sous-Bois paintings rarely had skylines or horizons and were characterized by detailing grassy areas and forest floors. Van Gogh made several paintings of undergrowth landscapes, which expanded and diversified his body of work. These paintings are considered modern abstract art. The composition is tight and zeroes in on only a few trees and the wooded ground. Van Gogh utilized varying shades of greens and yellows to convey a sense of light and vegetation that speckles through the trees overhead. Van Gogh’s signature fluid brushstrokes contributed to the realism in these works. These paintings captured experiences and called attention to entirely different aspects of the natural world.

He focused on those that worked the land, their hardships, and the countryside they cultivated. 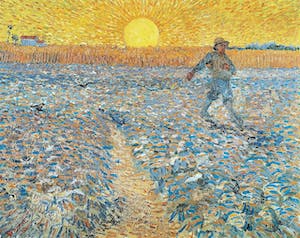 Vincent Van Gogh’s penchant for painting the countryside persisted from his earliest works to his final paintings. He had a fondness not only for landscapes but the agricultural tradition and the people who worked the fields and sowed the land. Depictions of rural life and farming were not uncommon in 19th century Europe, but van Gogh had a deep connection to country life and wrote extensively about his love of nature to his brother, Theo.  Van Gogh was deeply inspired by the work of his contemporary, Jean Francois Millet (1814-1875). He spent a significant amount of time translating and reinterpreting many of Millet’s works depicting peasants working the land. Though he copied composition exactly, Van Gogh infused these paintings with movement, color, and a vitality that were all his own. 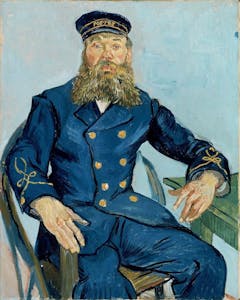 Throughout his ten years as a painter, van Gogh worked within the realm of portraiture. His approach to painting portraits was grounded in conveying emotion and character instead of attempting realism or photographic accuracy. Van Gogh was also famous for his work with self-portraiture, and he created more than 43 self-portraits in his lifetime. The self-portraits were done as a series of studies during introspective periods of self-isolation, which were fairly frequent. His self-portraits were intended to mark significant periods of his life. Each set of self-portraits contains a wide array of physiognomic representation of his mental and physical condition throughout these critical junctures in his life and career. In some, he appears unkempt, starved, with a weak jaw and lost teeth. In others, he seems visibly healthy with a more serene expression, more robust coloring, and sharpened features. A prime example of the inexorable bond between the self-portraiture studies and his mental and physical health is the addition of the bandage to his head is after he mutilated his ear. Interestingly, he rarely depicted himself as a painter.

Join us via zoom for one of our virtual tours!